Transmodel underpins the key British Public Transport data standards sponsored by the UK Department of Transport and has played an important role and  in the evolution and harmonisation of British PT data standards .
These standards are used to collect and integrate different types of data from many different  parties into a uniform data set that enables country wide journey planning. 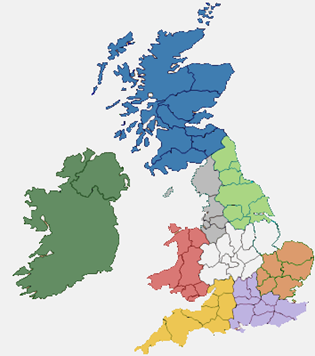 The UK as NPTG areas

The UK’s participation in the  PT Standards development is through CEN – through treaties which long predate and are independent of its membership of the EU. The business case for adopting and contributing to common  PT standards remains compelling regardless of Brexit. 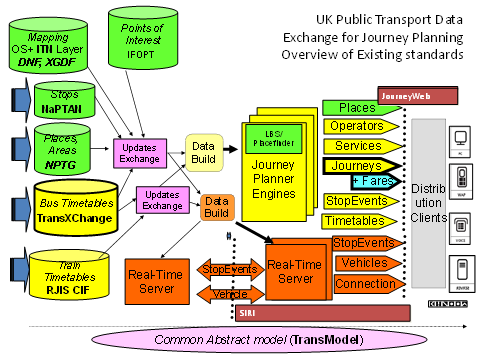 The NPTG, NaPTAN, and  TransXChange data formats  (outlined below) are used to assemble data from many different  operators for different modes in many different regions.  This is aggregated and processed into the systems used to support passenger information enquiries from web, mobile andat-stop applications.
JourneyWeb defines a uniform interface for making different types of passenger Query.  The SIRI interface is used to fetch and deliver real time information  about stop departures and vehicle movements

Three Transmodel based data formats are used to collect and exchange stop and timetable data.

How Transmodel helped with the Development of British Standards 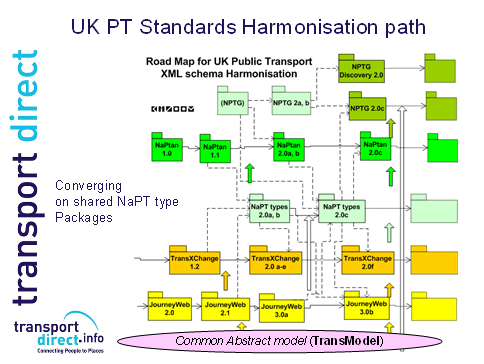 British PT standards have evolved in parallel during the development of  Transmodel and provide a good case study of the value of it as a conceptual model for harmonising and improving standards. The three NPTG, NAPTAN and TransXChange formats were originally separate formats with differences in how they described stops and other features. Transmodel gave a systematic basis for converging these into a single national model with shared subschema and a uniform set of entities. At the same time the UK’s experience in implementing the first (600,000)  large national stop database provided input into the next phase of Transmodel development, in particular the IFOPT module of NeTEx Part2 which draws on both NPTG and NaPTAN and work done to exchange accessibility data for the 2012 London Olympics.  They thus illustrate the way that common standards are helpful for sharing knowledge about effective representations and best practice  across Europe.